The Little Shop of Magic is happy to renew its partnership with the United States Marine Corps in the annual Toys for Tots toy drive.

Don’t have $100 to spend on your toys this year but you still want to help?

Not a problem: we understand how tight things can be around the holidays, especially under current economic conditions. Between those same dates, we will also accept donations of new, unwrapped toys at our brick-and-mortar location:

Thanks for reading and Happy Holidays! 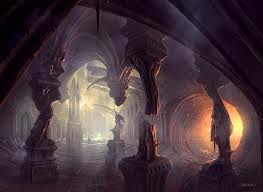 Now announcing the M14 Sealed league results! Over the past Five weeks we have had many spells cast in our shop but one Planeswalker towered above the rest, John Johnson.  He proved that he knows how to sling spells like a master by not only completing the most achievements, but also winning the most matches in the league! Here is the final standings for all the players in the League:

We would like to thank every one who came down and played in our event. Please keep an eye on our calender of events for the next league and other events like this one. (all prizes will be paid at this weeks FNM 7/19/13)

The opening celebrations for the 46th anniversary of Gen Con are less than a few days away and we're excited as can be for the original, longest running, best attended, gaming convention in the world!

Last year, more than 41,000 gamers experienced Gen Con and this year, we're asking all attendees to embark on a special mission which, should you choose to accept it, will reward you with great deals on convention releases.

We're looking for your help in spotting the hottest, must-have titles from all of the games being offered at Gen Con. If you snap a quick picture of that mouth-watering game and then This email address is being protected from spambots. You need JavaScript enabled to view it. it to us or post it on our Facebook or Google+ page with a brief description of why you think this game is hot, we'll give you a 20% off MRSP discount on that title when you get back home.*

It's as simple as that: you'll save lots compared to retail prices and you won't have to pay extra airline luggage fees or risk trying to cram your treasures in the car with the rest of your buddy's junk.

Now, if you're stuck at home, there's no need to feel left out: just keep your eye on our website, Facebook or Google+ page and, if you see our friends post something you like, just purchase it from us during Gen Con week and we will give you the same exact discount!**

So what are you waiting for? Get out there, hunt down the hottest new games and enjoy the best four days in gaming!

*20% off MSRP valid on all games and game accessories available for purchase in the Gen Con dealer's room. Items must be available through traditional industry distribution channels and must be available for pickup at Gen Con: no manufacturer pre-purchase or drop-ship offers will be honored. Future release items must be purchased within 7 days of product arrival, currently available products must be purchased within 7 days of convention end in order to qualify for discount. Some items may not be available outside of Gen Con: check with manufacturer or contact us for item availability before making any decisions. Offer limited to games and game accessories only.

**Items must be featured on our website, our Facebook or Google+ pages in conjunction with this promotion. All items must be paid for by close of business on Sunday August 18th, 2012 in order to qualify for discount. Offer limited to games and game accessories only. 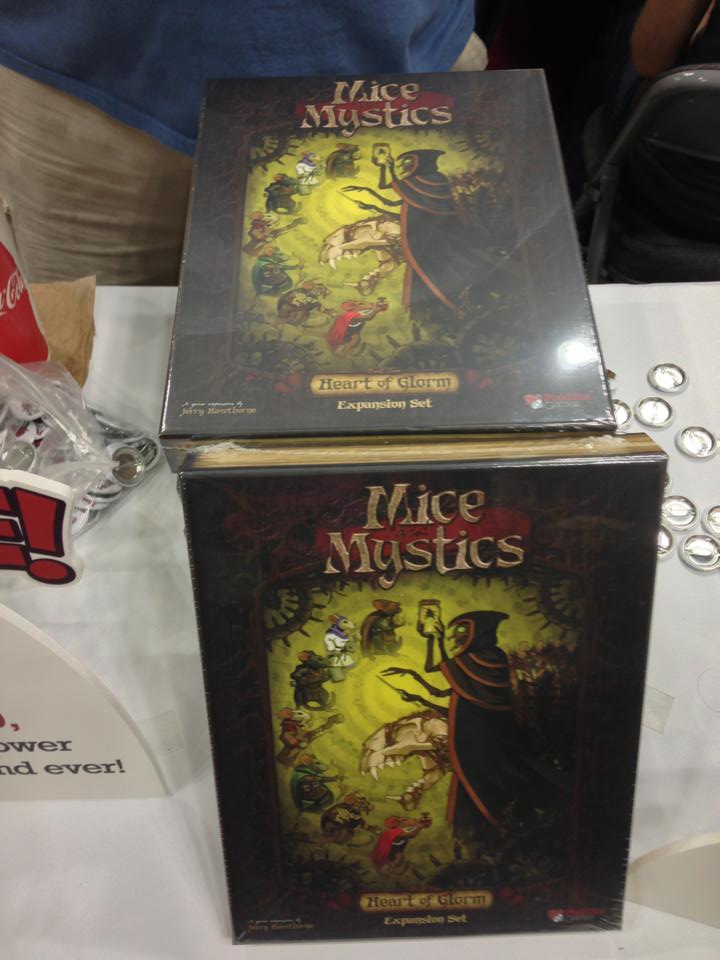 Mice and Mystics: Heart of Glorm Expansion: The Heart of Glorm storybook picks up right after the events of Sorrow and Remembrance, letting you and your friends continue the story of Prince Collin, Maginos, Tilda, Nez, Filch and Lily. Included in this expansion are new plastic figures, cards and counters, as well as a new series of chapters sure to test your mettle! And joining the heroes is Neré, a wild mystic who brings her powerful magic and knowledge of alchemy to the battle. 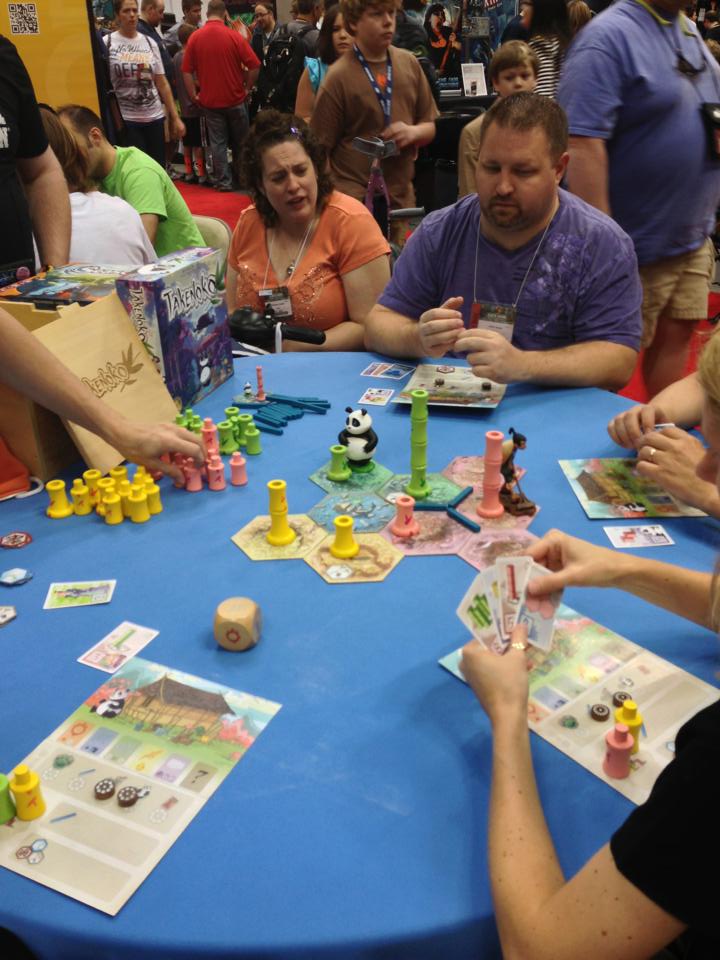 Takenoko Giant Edition: In Takenoko, the players will cultivate land plots, irrigate them, and grow one of the three species of bamboo (Green, Yellow and Pink) with the help of the Imperial gardener to maintain this bamboo garden. They will have to bear with the immoderate hunger of this sacred animal for the juicy and tender bamboo. The player who manages his land plots best, growing the most bamboo while feeding the delicate appetite of the panda, will win the game.

PLEASE NOTE: This is a special edition of the standard Takenoko game and is limited to a production run of only 200 copies worldwide. Pricing and allocations are not guaranteed.

Robotech RPG Tactics: Afast-paced, tabletop combat game that captures the action and adventure of the Robotech anime. Two or more players can engage in small squad skirmishes or scale up to massive battles. Relive the clashes of the First Robotech War, engage in stand-alone tactical games or use the dynamic game pieces to enhance your Robotech RPG experience. Or simply collect your favorite mecha from an expanding range of top notch game pieces

Dungeon Twister, the Card Game: a two-player-only take on Dungeon Twister with the entire game converted into cards. As in the original game, players in Dungeon Twister: The Card Game build a team from the characters and objects available to them, then head into the maze to try to navigate the hazards by using their action points each turn to move, rotate rooms, collect items, and combat opponents, making their way to the opposite side of the maze while avoiding – or taking out – the opponent's characters along the way.

Spyrium: Based in an imaginary world where England has been transformed into a Steampunk atmosphere. Your goal? Build factories, using workers who produce a substance known as Spyrium. Producing Spyrium in one factory, then processing it in the next results in victory Points. 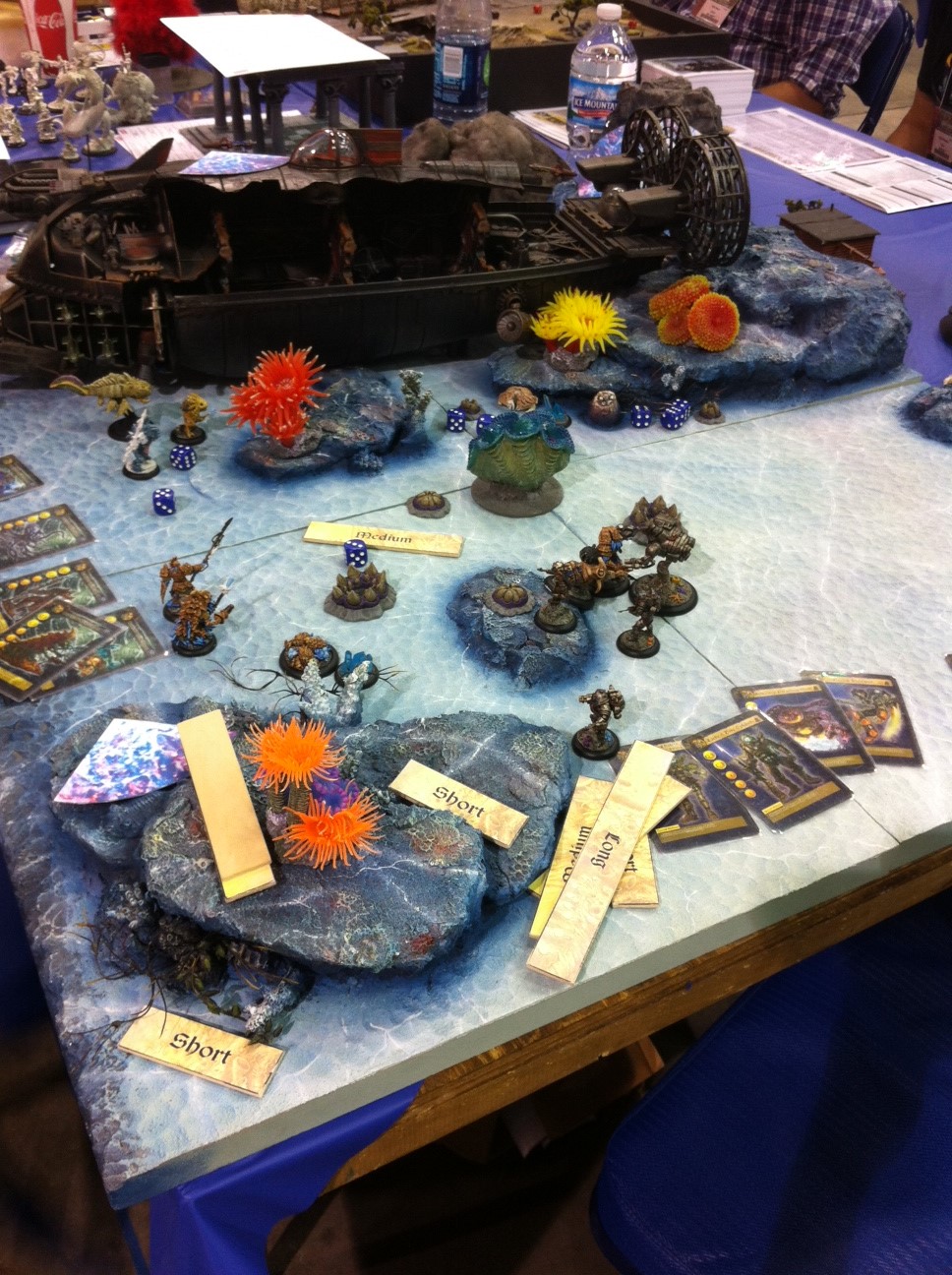 Deep Wars: Campaign based skirmish game. Mordheim style. Vertical and horizontal movement because its all underwater. Game designer is or had a marine biologist on staff when he wrote it so the environment has true aspects. Terrain is interactive in that some of it will attack you and grab you or hinder you. The models are fantastic. The best part? There is an easy way to create and build your own models or faction! Someone has apparently sat down and made a Merfolk army with all the reaper Merfolk!

Timeline - Historical Events: JFK’s assassination, the 1st step on the moon, the last crusade ... Can you put all these events correctly on the timeline? The first player to get rid of their cards wins.

Impacy City Roller Derby: A fast paced board game for 2 or 4 players based on flat track roller derby. Game play is done by moving your team of 5 roller derby girls around the board trying to get your Jammer to pass more opposing derby girls than your opponents Jammer.

Hot Rod Creeps: In this customizable racing game, your Hot Rod Creeps team is your ticket to glory! Each team has its own special deck of movement cards and its own strategy. Customize your Hot Rod! Add a new Engine, Weapon, Pit Crew, or set of Wheels at a Pit Stop along the way. Customize your racetracks! Make them as wild and crazy as you want, with more than 50 interlocking track tiles. Everything you need for a race unlike anything you’ve ever see is included with Hot Rod Creeps!

Catan - Explorers & Pirates: The newest addition to the Catan game. You can play with the basic set, you do not need to have the seafarers portion of the franchise. The play concepts of seafarers are introduced as part of the core rules and it comes with five scenarios. In closing I think its a good buy if you are not sure you want to get the seafarers expansion, since it introduces the concepts.

Cosmic Encounters - Cosmic Storm: The newest expansion for cosmic encounters, cosmic storm. It introduces 25 new alien races and space stations which give you a unique power as long as you control it. New and interesting races as well as Space Stations, how can you say no?

Congratulations to the top 8 players of our first ever VIP Qualifier! Everyone who participated today walked away with at least 2 Max Points good towards entry in future TCGplayer sponsored events.

A special congratulations goes out to the winner of our event today: Jon Beltran! He walked away with entry into a $50,000 championship, a sweet messenger bag and other hard earned prizes. 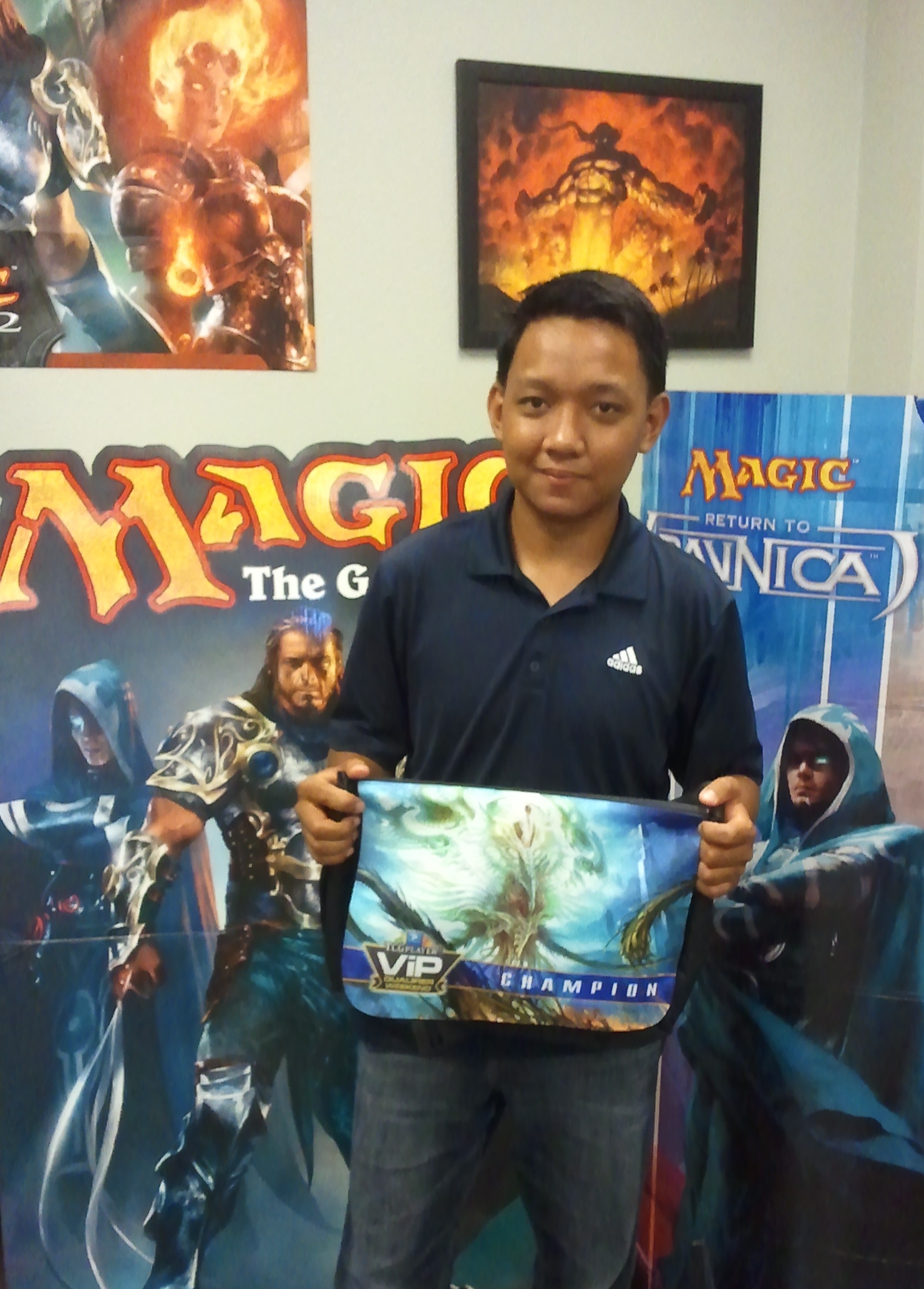 Now, for the top 8 players:

Thanks to everyone who came out and played in our first VIP Qualifier:

Check our Calendar of Events for even more exciting MtG events in our store!