ThunderGryph Games puts a lush look on most of its game releases, and the just-announced Iwari from Michael Schacht continues this pattern. Iwari is an abstract-like Eurogame in which players represent different tribes looking for their identity by traveling around far lands and expanding their settlements into five different regions on the board.

Iwari is a revised version of Schacht's classic game Web of Power, which was previously remade as China, then briefly appeared as Han. All the games feature the same basic gameplay: A landscape is divided into regions; these regions have lines throughout them with various building points, as well as more than a dozen connection points between regions. On a turn, you can play cards to place up to two pieces in one region. The color of the cards must match the region in which you're playing, although you can use a pair of cards as a joker. 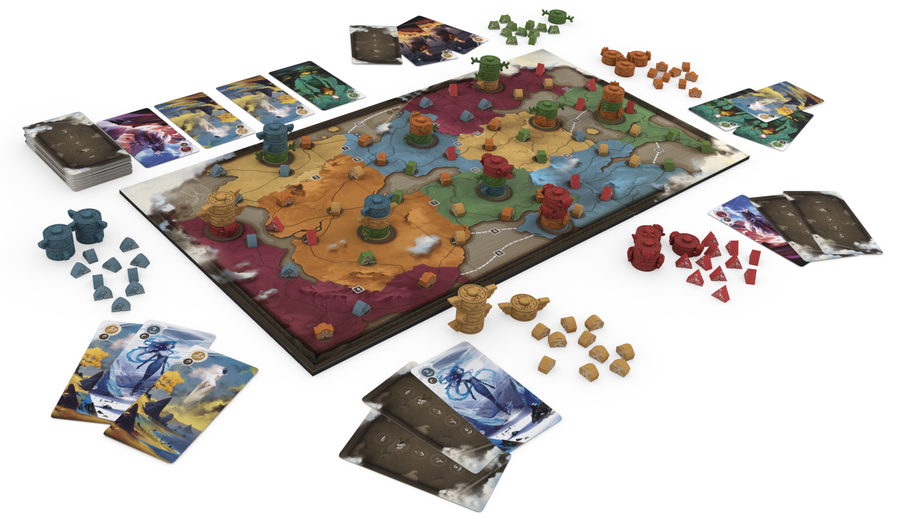 Thus, if a region has five spaces and you control four of them, then you score 5 points and the second-place person scores 4. Hmm, you did more work and used more resources, but you barely scored more than they did! Better to win that region with only three pieces while still scoring 5 points, yet if you wait too long to dominate a region someone else might carry it instead. Scoring for the connection points between regions works similarly.

Iwari is now available for Pre-order from a Wizard in our shop today!