Dark clouds gather west of the Grey Havens, and the seas lash upon the shore—their waves glinting orange and red while flames rise from the ruins of the Elvish fleet. It is a nightmarish scene—one you almost feel you've already witnessed—but you have no time to search for phantom memories. The Corsairs are sailing away…

Three new Nightmare Decks are now available to order for The Lord of the Rings: The Card Game!

When it was first released, the Dream-chaser cycle of Adventure Packs gave fans their first chance to brave the high seas and hidden isles west of Middle-earth. Following immediately upon the scenarios from The Grey Havens deluxe expansion, the Dream-chaser cycle thrust players into the fiery aftermath of a raid on the Grey Havens that was led by the Corsairs of Umbar and their captain, Sahír.

From the wreck of the Elvish fleet, the cycle carried players across the waves, where they and their heroes pursued Sahír and his ship, the Stormcaller. They boarded Corsair ships, battled a terrifying sea creature, and found their way to remote jungle island where they discovered an ancient temple and its Undead guardians. The journey was one of adventure, exploration, and discovery—thrilling and horrifying in equal measure… And now that balance is about to skew heavily toward the horrifying! 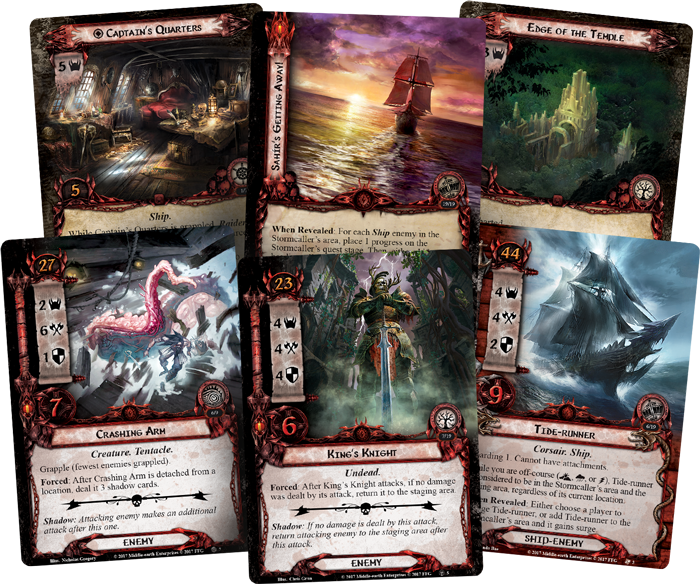 As with all Nightmare Decks, the three new Dream-chaser Nightmare Decks introduce new encounter cards and rules that replace and modify key parts of the original scenarios. The result is a darker and deadlier version of the original adventure—one that comes with greater challenges, refreshed themes, and all-new twists and turns!

For more information about the challenges and surprises these Nightmare Decks bring to your games, we turn to developer Matthew Newman.

Sherlock Holmes: The Thames Murders and Other Cases

“Come, Watson, come!” he cried. “The game is afoot. Not a word! Into your clothes and come!”

~ Sir Arthur Conan Doyle, The Adventure of the Abbey Grange ~

Crime moves through Victorian London like a disease, infecting the masses and dogging the heels of the innocent. Yet the people are not helpless against this sea of anarchy - they have on their side the world's only consulting detective, Sherlock Holmes! During a game of Sherlock Holmes: Consulting Detective, you become one of the Baker Street Irregulars, Holmes's agents whom he employs to discover information in search of the truth. With nothing but the facts of the case, a map of Victorian London, the London Directory, the daily issue of The Times, and your own wits, you must follow the clues and crack the case. 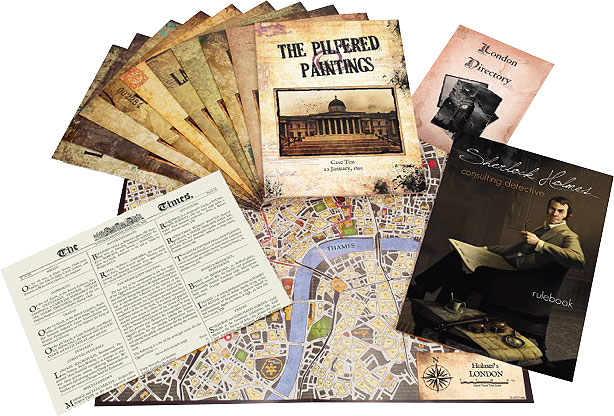 Ten devilish cases await your consumption in Sherlock Holmes: Consulting Detective, and each one offers countless hidden clues and false leads to tease you.

The Thames Murders and Other Cases offers ten thrilling cases, each one drawing you into the mystery surrounding a deadly crime in the world of Sherlock Holmes.

From the curious case of The Munitions Magnate, to The Pilfered Paintings and The Mummy's Curse, every case offers a new challenge for your deductive skills. It's up to you and your friends to conduct your own investigations, visiting the witnesses, the suspects, and the scene of the crime in order to piece together the narrative behind each crime.

A Game of Thrones: The Fall of Astapor Chapter Pack 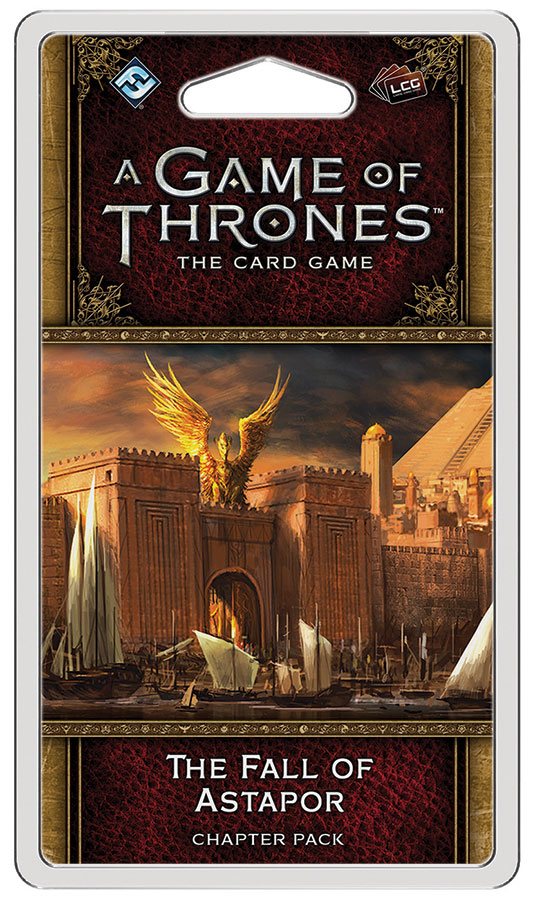 A Game of Thrones LCG: 2nd Edition - The Fall of Astapor Chapter Pack

Bloody plots consume the Seven Kingdoms, as once-loyal bannermen turn against the kings that they had sworn to serve. A procession from Dorne marches north to King’s Landing, intent on exacting vengeance against the Lannisters. Robb Stark moves quickly to reclaim Winterfell, unaware of the dark plots being hatched in Harrenhal and The Twins. And on the continent of Essos, Daenerys Targaryen liberates the city of Astapor from the Good Masters and wins an army of Unsullied in the manner of Old Valyria - with fire and blood!

The third Chapter Pack in the Blood and Gold Cycle for A Game of Thrones: The Card Game, The Fall of Astapor continues the saga of A Song of Ice and Fire into A Storm of Swords. Within this expansion pack, you'll find more cards focusing on the new 'bestow' keyword, powerful new economy, and the subtly growing influence of House Frey, as well as iconic characters including Grey Worm, The Twins, and Theon Greyjoy.

Games on the Go! "Your imagination is your preview of life's coming attractions."

It's that time of year again: school's out and graduates are on their way to a new and exciting chapter in their life!

Here's a handy list of travel-friendly games, perfect for vacation and your favorite student on the go! In HIRp, The Royal Game of Viking Conflict, two players take on the role of opposing Viking kings, or Lofoungr, fighting for control in an archipelago. The Lofoungr are joined on the battlefield by their closest warriors (HIRp) and their boats (Karve), with the land represented by a board with 11 squares.

Each turn you make five moves with your pieces, which include entering the board, entering or exiting a Karve (the boat), and moving between squares on the board. You win the game if you manage to control the five middle squares of the board or force the opposing player's Lofoungr off the board.

Featuring cloth components with embroidered patterns, wood pieces, and an authentic Viking coin replica, this ingenious, portable, abstract game is uniquely crafted to give the feeling of vintage, Viking-era gaming.