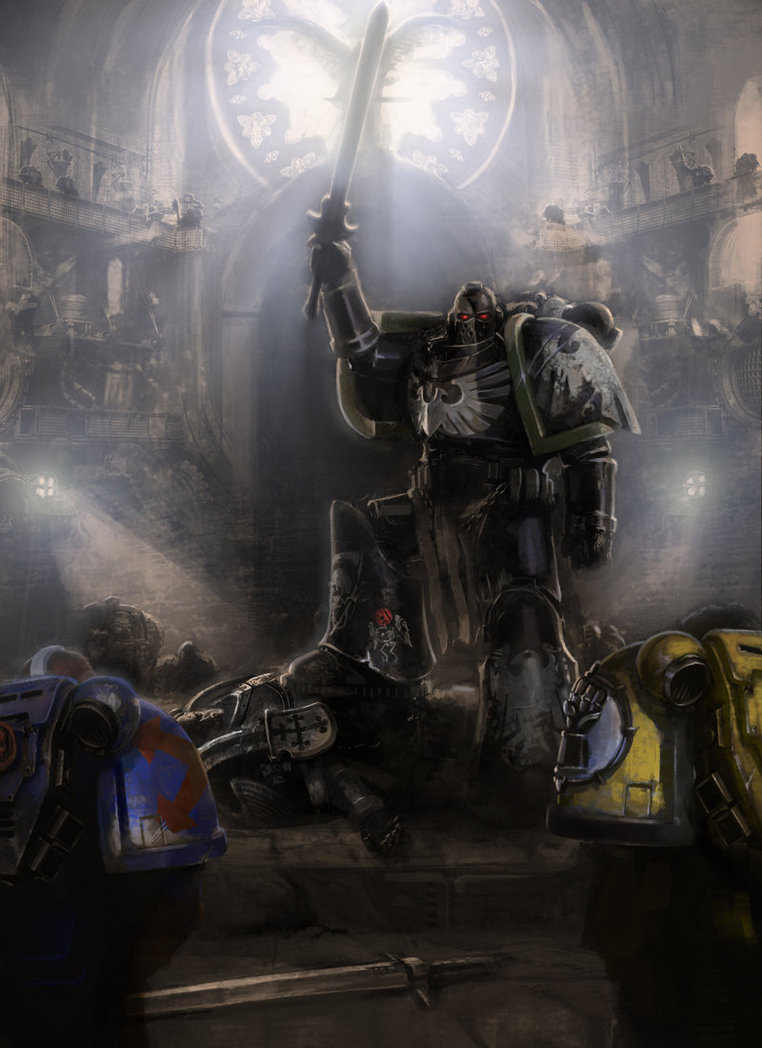 After the Horus Heresy, Rogal Dorn, Primarch of the Imperial Fists, rejected the Codex Astartes that had been recently written by Roboute Guilliman, Primarch of the Ultramarines, calling him a coward for not helping in the defense of the Imperial Palace on Terra during the Horus Heresy. Tensions escalated and after a civil war nearly broke out in the Imperium again, Rogal decided the Imperial Fists would symbolically enter the Pain Glove and emerge in accordance with the Codex Astartes. The opportunity to do so presented itself in a battle that would later become known as The Iron Cage. The Imperial fists were nearly destroyed by the Iron Warriors when Rogal committed the entire legion to the siege on the Eternal Fortress. Cleansed by their sacrifice, the Imperial Fists began their reorganization in accordance with the Codex Astartes. As part of the reorganization, the legion participated in the Second Founding. The Imperial Fists Legion was split into several chapters, including the Soul Drinkers, Black Templars, and Crimson Fists, among others. One chapter kept the Imperial Fists' name, combat specialties, and gene seed.

The Feast of Blades 40K Invitational tournament is held every year in Denver, CO. To be able to participate, players must win one of numerous qualifier tournaments held at game stores around the country. All of these qualifier tournaments use the same format, missions, and scoring rules to ensure consistency for all participants around the country. Should you be able to win one of these qualifiers, you also win the chance to participate in one of the most prestigious 40K tournaments ever. Every player there is an expert and also had to fight their way to victory at their respective qualifiers.

The qualifier tournament at the Little Shop of Magic will be held on August 18th. All of the details can be found on the event listed on our calendar. Players are recommended to pre-register for the event on our online store or in person in our brick-and-mortar location. Rules will be strictly enforced and everyone is expected to bring their A-game. No whiners here, it is expected for people to be competitive and for players to be fielding the most powerful and sometimes "cheesiest" armies they can to try and win.