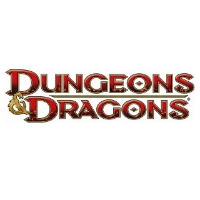 Anime Social is proud to offer Dungeons & Dragon 5th edition games for all members! This is an open event available for all players, regardless of your experience level. Several tables are available for all levels. All games are offered as home games, and even allow homebrew materials, as long as the GM agrees. Players who wish to make new characters should show up early to the event.

Dungeons & Dragons is one of the oldest and most famous forms of Tabletop Role Playing, where players create characters from their imagination and navigate different situations crafted by an overseer known as a Game Master, or GM for short. The characters represent their capabilities through different numbers and roll dice to determine how successful they are at certain actions. In Dungeons & Dragons, players are placed in a fantasy world, where magical beasts, wizards and fantastical discoveries await them. 5th Edition is the newest version of Dungeons & Dragons, which goes back to the roots of the game, focusing on story telling and player stories.

A player should bring pen and paper, along with a set of dice. A traditional set of dice include one 20-sided die, one 12-sided die, two 10-sided dice, one 8-sided dice, one 6-sided die and one 4-sided die. Experienced and returning players should also bring their character sheets as well.
Materials for new players can be provided for their first game, but they should prepare to bring their own materials in future games. 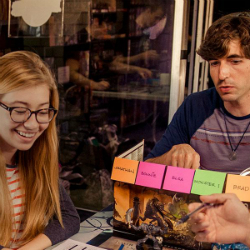 What is Dungeons and Dragons?

The first Dungeons & Dragons game was played back when Gary Gygax and Dave Arneson chose to personalize the massive battles of their fantasy wargames with the exploits of individual heroes. This inspiration became the first fantasy roleplaying game, in which players are characters in an ongoing fantasy story. This new kind of game has become immensely popular over the years, and D&D has grown to include many new ways to vividly experience worlds of heroic fantasy.

The core of D&D is storytelling. You and your friends tell a story together, guiding your heroes through quests for treasure, battles with deadly foes, daring rescues, courtly intrigue, and much more. You can also explore the world of Dungeons & Dragons through any of the novels written by its fantasy authors, as well as engaging board games and immersive video games. All of these stories are part of D&D.