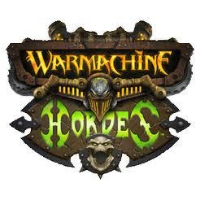 Casual get-together for Warmachine/Hordes fans. Meet grizzled veterans, swap war stories, get advice from the pros and roll some dice. Great for new and experienced players.

This event follows an open play format, allowing you the option to attend it at your leisure and with the amount of commitment you desire. Open tables will be provided, but please take a moment to let us know if you plan on playing: this will help us plan accordingly and ensure that you have a space reserved for your game.

You will need to bring anything required to run your army. All other play materials will be provided by our Wizards.

The aggressive, metal-on-metal WARMACHINE game is set in the Iron Kingdoms, an environment that combines the richness of traditional fantasy with the excitement of steam power and gunpowder. Across the realm, ancient rivalries among nations are exploding into all-out conflict, setting the stage for WARMACHINE and other Iron Kingdom products.

In this 30 mm tabletop miniatures battle game, each player controls an elite soldier-sorcerer who leads an army into battle to fight for king, country, or simply coin. These warcasters are formidable and experienced combatants, and the warjacks they control represent the pinnacle of military might in the Iron Kingdoms.

WARMACHINE puts players directly onto the battlefield as warcasters and their armies clash. A game is fought with the thundering cannons, ripping iron claws, and crushing hammer blows of the giant steam-powered warjacks as well as the devastating spells wrought by the warcasters themselves and the lethal weapons of their warriors. When the dust settles, one side is victorious—and the other is nothing but smoking scrap metal! 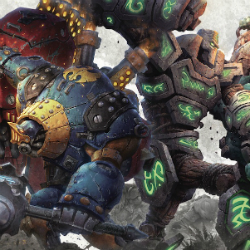 The raging, fast-paced HORDES game is set in the wilds of the Iron Kingdoms, an environment that combines the richness of traditional fantasy with the excitement of steam power and gunpowder. Across the realm, ancient rivalries among nations are exploding into all-out conflict, and the tameless factions of HORDES have joined the fight, whether to preserve their ancient homelands or with an eye toward conquest.

In this ferocious 30 mm tabletop miniatures battle game, each player controls a powerful battle-wizard who harnesses the strength and fury of the savage warbeasts that stalk the dark places of the Iron Kingdoms. Through their unique link to these untamed creatures, these warlocks are able to drive them to unparalleled heights of destruction.

HORDES puts players directly into the maelstrom of war as warlocks and their beast hordes struggle for domination and survival. A game is fought with the powerful jaws and flesh-ripping talons of warbeasts as well as devastating spells wrought by the warlocks themselves and the lethal weapons of their warriors. Only one side can emerge victorious from the carrion-scattered field of war!