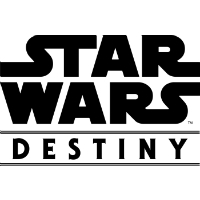 The format for this event is draft. Each player will need at Star Wars Destiny Allies of Necessity Draft Set to participate.Players may bring their own or purchase one at the start of the event.

At the start of draft, players will open three of their six boosters, create a single stack of cards, setting the dice aside. Each player will then pick a single card from their stack, before passing it to the player on their left, this is repeated until all cards have been selected. Next, the entire process is repeated, passing the card to the right instead of the left. Once all the cards have been selected players will collect all matching dice, and build a deck from their pool.

Yes: assorted promos will be given out to each participant.

A draft set will be required in order to participate along with the six packs included in your registration fee. For this event, players need an Allies of Necessity Draft Set. 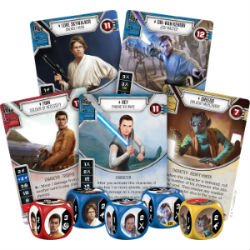 Captain Phasma and Count Dooku battle Han Solo and Luke Skywalker in the Jedi Temple on Coruscant. Jango Fett and Jabba the Hutt attack Rey and Finn as they pass through the frozen wastes of Starkiller Base. Play out your own epic, saga-spanning, “what if” battles in Star Wars™: Destiny, a collectible dice and card game for two players!

In every game of Star Wars: Destiny, you’ll gather your small team of iconic characters and battle to defeat your foes, using your dice and the cards in your deck. The last player with characters left standing wins the game, but to successfully outmaneuver your opponent, you’ll need to carefully consider your options and enhance your deck with new dice and cards. If you ever wondered who would win a duel between two teams of heroes and villains from the Star Wars universe, there’s no better way to find out than with Star Wars: Destiny.