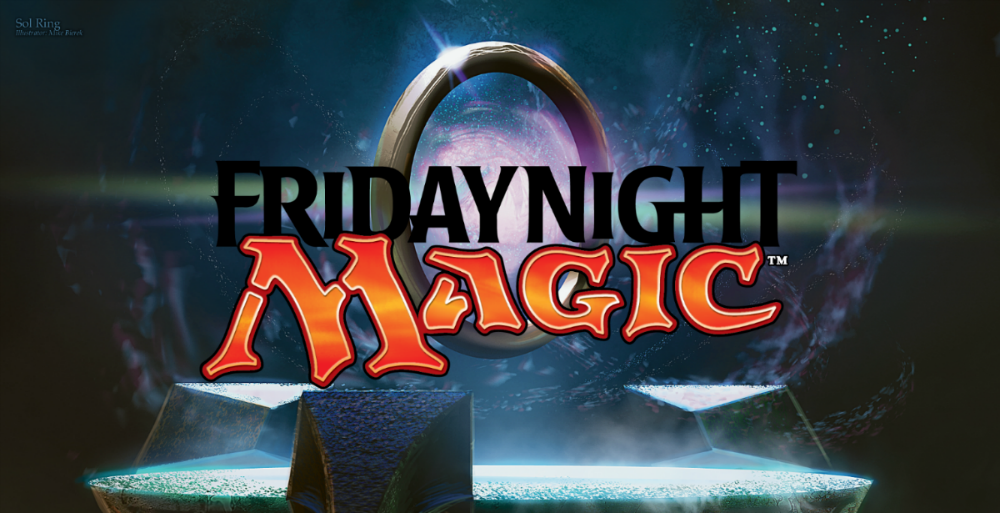 Are you looking for a way to play Magic while meeting new friends and winning cool foil prize cards? Then Friday Night Magic is exactly what you're looking for! Try it out and discover why Friday night is the best night of the week!

To make it easier to participate, Friday Night Magic events are open to anyone and feature the Standard Constructed, Booster Draft formats, and Commander Formats.

The Format is Commander

What are the Prizes?

FNM specific & other assorted promo cards will be given to the players that place in the top spot in EACH tournament.   Each Player also recieves a prize pack for participating.

What is the entry fee for a Booster Draft tournament?

The entry fee is $5. We will waive the fee with the purchase of 3 MtG booster packs on the day of the event.

What do I Need to Bring?

You will need to bring a Commander legal deck, your DCI number* and any dice, tokens and counters you want to use.

*Don't have a DCI number? We can set you up with one on the day of the event, just ask an employee at the checkout!

What is the Commander Format?

In this casual, multiplayer format, you start with a life total of 40 (rather than the usual 20) and choose a legendary creature to serve as your Commander. You then choose cards to match your Commander’s color identity to build your deck. A card's color identity is any mana symbol appearing on that card.

The commander deck contains 100 cards: 1 Commander and 99 others. Your deck may contain only one of any individual card, with the exception of basic lands.

In addition to the normal Magic loss conditions, you can be defeated in this format by taking 21 or more points of combat damage from a single Commander over the course of the game. The Commander is tracked across zone-changes for this purpose.

To learn more about the format visit the official Commander website: http://www.mtgcommander.net

What is Magic: the Gathering?

In the Magic game, you play the role of a planeswalker, a powerful wizard who fights other planeswalkers for glory, knowledge, and conquest. Your deck of cards represents all the weapons in your arsenal. It contains the spells you know and the creatures you can summon to fight for you.

Trading card games like the Magic: The Gathering TCG combine collectible cards with a strategy game. You don't know what you'll get in a Magic booster pack. You just start a collection and trade with other players to get the cards you want.

The best part about a trading card game is that it's always changing. You design and build your own unique decks, and each Magic game you play is different. New Magic expansions are released a few times a year, and each new expansion brings new ways to stupefy and defeat your opponents.