Force Friday, the highly-anticipated launch day for the Star Wars: The Force Awakens toys, collectibles and gadgets, officially entered our calendar of geek holidays on September 4th. Hundreds of fans gathered in line, some at midnight, others at regular opening times, for a chance to land coveted merchandise from the upcoming Star Wars movie. Amidst the sea of plastic lightsabers, gigantic action figures, wookie plushies and other, more mundane toys, one of our kind was snuck in without fanfare by Fantasy Flight Games: The Force Awakens X-Wing Core Set.

Guess who was not invited to this party?

If you said "my friendly local game store" you would be correct.

We first learned that there could be a new X-Wing set on the horizon when a series of leaked photos started cropping up on the internet a few months ago. The photos confirmed our suspicions that something was in the works for the new movie (we noticed that three part numbers were 'skipped' in the sequence of X-Wing releases: one of them turned out to be this set), but it was not until 10:30 PM on Thursday September 3rd that we received an official communication from FFG concerning this item.

So why was the hobby channel not included in the Force Friday promotion? After all, isn't it here, on these gaming tables, that the X-Wing community is nurtured and grown? Did FFG turn its back on the tier of the industry that is responsible for 87% of their sales? More importantly, do we have a right to be upset for being left out?

Well, yes and no.

Let's be honest, I was pretty irate when our suspicions were confirmed. Our company invests a lot of time, resources and payroll supporting X-Wing, and for a number of very good reasons:

Being left out felt like a heavy handed slap to the face but, after taking a few minutes to absorb the news and calm down, I started piecing together what I believe are the reasons for not being included:

Our industry is young (and small). Let's face it, tabletop game sales on the scale we are currently seeing is a fairly new development. As large as that scale may appear to our eyes, it is still only a tiny fraction of the general toy market. As far as the big boys are concerned (and I would say that Disney qualifies as big), we're not even a blip on the radar. The fact that FFG was considered for inclusion in Force Friday is, in it of itself, a small miracle.

They are not in control. In Thursday's email announcing the new set, FFG stated that "Today is the first day that we can talk to you all about this product and we are working very hard to get these to you as quickly as possible." I believe this statement to be true and, had I been in their shoes, I probably would have complied with the same gag order in order to participate, especially given the scope of the event.

There is a bigger picture. True, some of the established X-Wing clientele rushed to mass market outlets and purchased the set early, denying those sales to the hobby market. But it is also true that a lot of you called us to ask if we had it (we do and we thank you for thinking about us). Placing X-Wing starters in outlets like Target and Barnes & Noble allows for added exposure and the possibility of creating a new hobbyist that would eventually trickle back into the hobby stores.

We cannot be trusted. Having been in the gaming industry for well over two decades, I am painfully aware that many industry professionals still treat this business as a hobby. I severely doubt that, had FFG been able to reveal these sets to hobby retailers, they would have been able to keep their mouths shut about it. Time and time again, store owners have demonstrated their inability to follow simple requests like "don't spoil it" (the early leak of the Magic Hellvault contents), "don't sell it on eBay" (promo, demo or early release copies of games), "don't sell it before street date" (Magic pre-release leftovers, D&D books, etc. etc. etc.)

So, should we be mad? If so, we should start by being mad at ourselves.

We cannot demand the respect and trust of our manufacturing partners if we insist on behaving like slobbering fanboys and petulant children. Inclusion in the 'big boy' club will come when we grow our industry to the level it rightfully deserves AND we behave in a professional and mature manner in our business endeavors (even if they happen to involve selling happiness in a box).

Until then, we should make some lemonade from this lemon and make sure that newly recruited Force Friday X-Wing pilots have a place to call home when they take that first big step into our world. 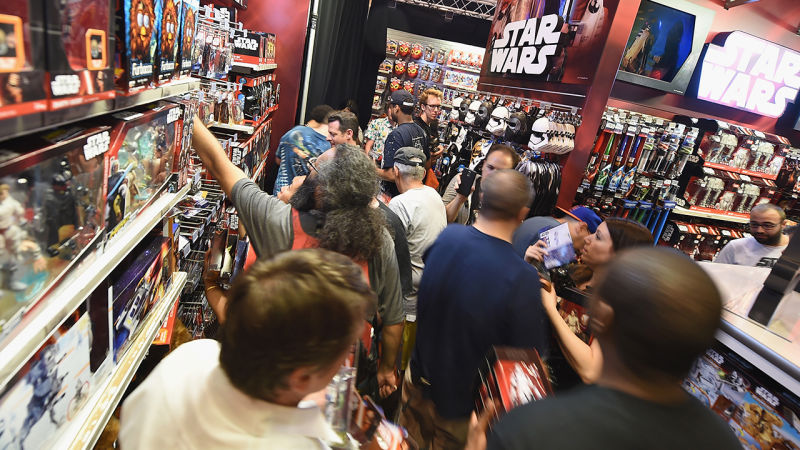 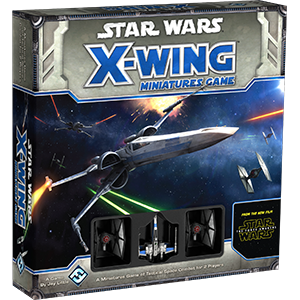 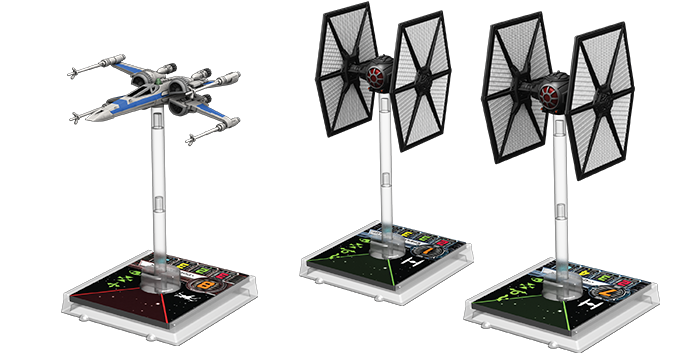 In this special installment of It Oozed From the Office, I am joined by my good friend Sean Lashgari, Director of Sales and New Market Development at Alderac Entertainment Group. We're back to video on this one to discuss two special events that we are hosting for the Doomtown Reloaded card game:

Check out the video below to find out how you can be a part of this historical event, and walk away with a ton of super-cool prizes!

Ep3 - Probed by the Manaverse

Welcome back to It Oozed From the Office, my semi-regular collection of ramblings and ravings on the gaming industry.

After a long hiatus, I've decided to resume the project as a written blog. This format seems to fit the subjects presented while being manageable in the amount of free time I have available. Moving forward, as I experiment with possibilities, you can expect to see a combination of different mediums, including live hangouts and podcasts. As always, you comments and suggestions on what works and what doesn't are greatly appreciated.

Today I won't be writing as much as talking, thanks to the efforts of Tom Traplin and his Manaverse Podcast. I recently had the honor of being interviewed by Tom for the 15th episode of his podcast, which is aimed at helping game store owners build their business while growing the gaming community.

During the interview we talk about:

You can find Tom's podcast on his website and subscribe to it on iTunes or on Android.

Ep4 - the Feds Strike Back

A few days ago, the Federal Trade Commission took its first-ever legal action against a crowd-funded project: the Doom That Came to Atlantic City board game. Since then, a lot has been written regarding the settlement, but I feel that it's worth the time to have a look at what the takeaways are of this ordeal.

First ones there: Our industry now has the dubious honor of being on the forefront of what is likely to be a series of legal cases aimed at regulating the crowd-funding phenomena. Don't get me wrong, it's not like creators in other fields are not getting their fair share of heat. The tech sector, traditional book publishing, and even some zealous appliance designers have all given us some great pitches that failed to deliver after funding (for far more money than what was raised for Doom), but it's interesting to note that Doom was the first open-and-shut crowd-funding case that the feds tackled.

Definition: crowd-funding campaign is now defined as "the practice of funding or otherwise financing a project or venture by raising or soliciting money from a large number of people, typically, but not exclusively, via the Internet." Thorough omission or intent, it would appear that the FTC is identifying project backers as 'customers' rather than 'investors' in their settlement.

Deception: One of the deciding factors in this case was the fact the the creator blatantly misrepresented how the backer's money was going to be used. Erik Chevalier raised over $122,000 to create Doom but, according to the FTC, the great majority of those funds were spent "on unrelated personal expenses such as rent, moving himself to Oregon, personal equipment, and licenses for a different project."

Thou shall pay: the settlement imposes a settlement of $111,793.71, which was suspended due to Chevalier's inability to pay. However, should it later be revealed that Chevalier misrepresented his financial situation, the full amount will become due.

Thou shall not 'do it again' or 'benefit': Chevalier is also barred from any "deceptive representations related to any crowdfunding campaigns in the future," and "he is also barred from disclosing or otherwise benefiting from customers’ personal information, and failing to dispose of such information properly."

Fortunately, in this particular case, the story has somewhat of a happy ending. While the backers will most likely never see their money returned, nor will they obtain the coveted stretch goals in the foreseeable future, they've at least received a copy of the game (even if a few years past due).  Cryptozoic Entertainment, the current publisher of Doom, agreed to fulfill the orders placed by backers on KickStarter at their own expense in 2014, and is currently considering a second print run as the original quantities dwindle through established retail chains.

While this is the first time federal authorities have taken action over a crowdfunding campaign, consumer protection authorities in Washington state filed a lawsuit over an undelivered Kickstarter last year. The state attorney general sued Ed Nash and his company for failing to deliver its promised Asylum Bicycle Playing Cards, a "retro-horror themed playing card deck." So, while the law is stepping up its game, it is important to realize the legal world moves at a much slower pace than what we consumers would like. In the meantime, crowd-funding remains a wild-west scenario for those dabbling in it. Without clear definitions or consequences, funded projects that end up 'heading south' slowly spiral out of control over periods of years.

What troubles me the most about crowd-funding in our industry is that it removes barriers that prevent hobbyist from making the jump to professionals. While this is certainly one of crowd-funding's greatest strengths, it is also its Achilles's heel. Let's face it, pretty much everyone has dreamed of turning a hobby into a livelihood at some point in time, but not all of us are equipped with the tools (or the stamina) to do what it takes to turn that dream into a reality. Dreams can turn into nightmares when you owe your backers and the pressure to deliver piles up. The ease with which a crowd-funding project can be launched eliminates a lot of the steps (and responsibilities) involved in obtaining other means of financing, resulting in far more 'jump before you look' scenarios than in the past.

Legal actions such as this will hopefully give some measure of protection to the consumer AND the project creator. I, for one, tend to be lot more cautions about requesting funding if it means losing my home, my business and my retirement fund. Pausing to consider the consequences of failing to deliver on a project means more time spent in market research, cost and revenue analysis and product development.

The end result? Hopefully, better games, legions of satisfied consumers and a rise in the number of professional, responsible and (eventually) self-funded creators. 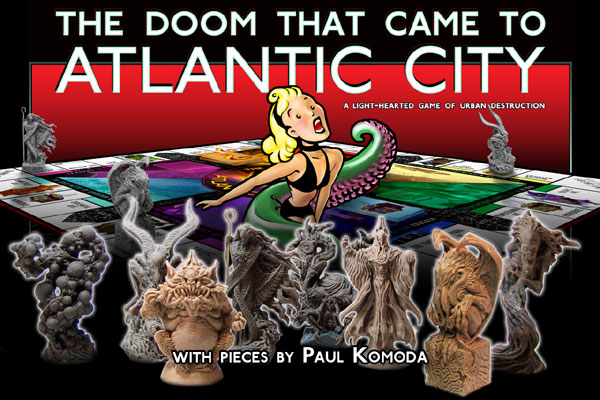 In this hangout we look at some of the hot new releases from the show, talk about the convention in general, and analyze what motivates nearly 50,000 gamers to make the journey to Indianapolis every year.

To find out more about Anthony's upcoming Big Angry Mosters game, check out his Facebook page.

Presented as a mix of blogs, vlogs, live broadcasts and (eventually) audio podcasts, It Oozed From the Office features ramblings and insights from the gaming industry.